Facing Down the Bear

Central Banks around the world are once again making headlines. Canada, India, the UK, Switzerland, the European Union, and the US – to name just a few – are all on a campaign of interest rate hikes that are roiling global financial markets. On Wednesday, the European Central Bank (ECB) held an unscheduled meeting to address the strains the increases were causing, and the US Federal Reserve (Fed) capped its two-day meeting with three-quarters of one percent (0.75%), the largest move it has made since 1994.

In a world already dealing with post-pandemic supply disruptions, aggressive inflation, a Russian invasion in Ukraine, record gasoline prices, and a looming global food shortage, the drag of rising interest rates has raised fears that a recession is imminent. These issues have caused a broad market decline, one not seen since the start of the pandemic in March 2020. Closer to home, the excess money spent by the Federal Reserve to provide liquidity during the pandemic must now come out of the market to reduce inflationary pressures. To do that, rates are being raised to remove the “wealth effect” previously felt when our collective investment accounts were much higher. This is a stated goal of the Federal Reserve.

Higher rates combined with inflation levels not seen since the 80s have similarly pressured bond prices. While declining far less than stocks, broad bond indices have fallen by double digits, a rare occurrence. In short, there has been almost no place to hide from the volatility.

Let’s be honest, that queasy feeling of doubt has returned … our brains tell us that to avoid more losses we should be doing something, anything! At the same time, hopefully, this is when the guidance of your JFS advisors comes to mind and stay-the-course reasoning prevails. History tells us that when the Fed is in firm charge, not “fighting” their actions is the appropriate course of action. Sometimes doing nothing is the best solution. Here are just a few reasons to stick to long-term thinking. 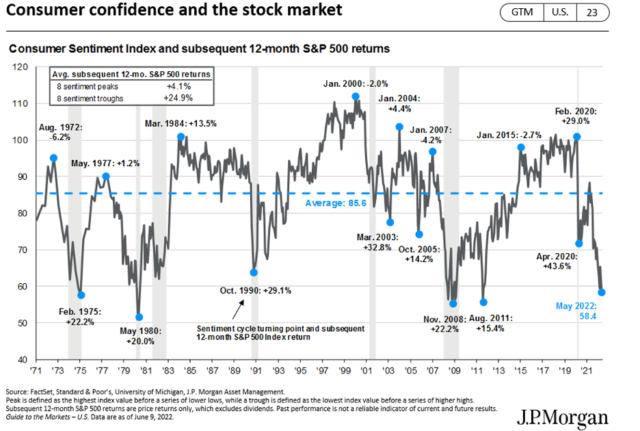 It is important to acknowledge that not much looks bright today. A shallow recession in 2023 or 2024 is a real possibility as an aggressive Fed has made clear it is determined to tamp down inflation at almost any cost. Interestingly, in yesterday’s press conference, Fed Chair Jerome Powell noted that data supports some underlying inflation factors easing. But the “headline” effects of gasoline and food prices are creating an expectation in consumers of continuing price increases, which the Fed fears can become self-fulfilling. They intend to break that cycle, and in doing so, the chances of missing the runway for an economic “soft-landing” rise. In addition, economically, politically, and socially, there are vast differences of opinion being drawn from the same sets of facts, and crosscurrents of uncertainty are strong. However, we want to leave you with these words: Every economic recession sows the seeds of the next economic recovery, and every economic recovery sows the seeds of the next recession. This is the normal functioning of financial markets, and how excesses are removed. Bright days will eventually return. Despite volatility and fear, the confidence to maintain intelligent investment practices is vital for long-term success.

On behalf of all my colleagues at JFS, thank you for your continued confidence.