Global equity markets, while remaining solidly positive for the year-to-date, have retreated in the past several months. Trade worries have cast a broad shadow. As the U.S. and China stumble through on-again/off again trade negotiations and tariffs, stock and bond markets respond with either optimism (on-again) or pessimism (off-again). Tariffs are now beginning to clearly impact both countries. U.S. consumers face rising import prices while China combats a drain of capital investment with companies looking to produce goods elsewhere. Progress has been made in recent October talks, but both sides remain a long way from a comprehensive agreement.

In addition, new tariffs on EU goods have likewise stoked worries. Economic data continues to send mixed signals. US gross domestic product (GDP) grew 2.0% in the second quarter, down from 3.1% the prior quarter. Job growth shows a similar pattern, posting 136,000 new jobs in September, which, while still positive, is well below the average of 223,000/month from 2018. Manufacturing data and business capital expenditures are also slowing, as companies fret over future impacts of trade tariffs and slowing global economies.

U.S. consumers likewise have cooled, with spending rising 0.1% in August, dropping from a more robust 0.6% in July. Core inflation also barely moved in September, rising 0.1%, and at 1.7% year-over-year, remains persistently low and well below long-term averages. This is helping to keep wage gains in employees’ pockets, and until recently, buoyed spending. Oil prices however could soon rain on that parade, as rising Middle East tensions have triggered recent price jumps in crude and natural gas.

Declining economic forecasts have led to falling yields in the bond market, with the 10-year Treasury (at this writing) yielding approximately 1.7%, down from 2.6% at the beginning of the year. As a reminder, when bond yields fall their prices increase, so it has been a good period for bonds, with the broad Barclays US Aggregate Index increasing approximately 8.2% year-to-date.

You also may have heard about a “yield curve inversion,” which is when short-term rates are greater than long-term, a situation that can signal an economic recession. The US yield curve has inverted at times in 2019, in each case quickly reverting back to normal, but nonetheless sending a clear signal of financial market’s unease over the uncertain economic outlook.

Not surprisingly, contradictory data has led to intense speculation about future actions by the US Federal Reserve (Fed) as well as other global central banks. A year ago the Fed was signaling rate hikes, but at both their July and September meetings, the Federal Open Market Committee (FOMC) cut rates by 0.25%, to a current target range of 1.75 – 2.0%, and speculation is high additional cuts may be forthcoming.

Overseas, interest rates remain at record lows in the face of weak economies and stubbornly high unemployment. Nearly $17 trillion of foreign bonds actually have negative yields — a phenomenon which confounds classical economists. The European Central Bank has announced additional economic stimulus in the form of new low-cost loans to banks and a renewal of open market bond purchases.

As always, please call us to address your questions, and make sure to apprise your advisor of any changes to your financial situation. 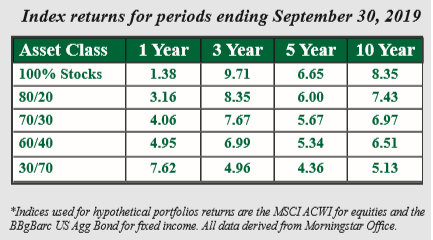