Until recently, 2019 has seen a rebound in global markets and global sentiment since a tumultuous close to 2018. Both U.S. and international stock markets have seen double-digit growth, and bond prices have also climbed. However, recent fears around the lack of a trade deal with China, as well as rising tensions in the Middle East, have resulted in some pullback in confidence and market prices.

Several fundamental economic factors have been at play. U.S. job creation was a surprisingly strong 304,000 in January, fell to 20,000 in February, but rebounded to 196,000 jobs in March and 263,000 in April. The addition of 75,000 new jobs in May marked the 104th straight month of gains, indicating the U.S. economy is still in a growth mode and likely to notch its longest expansion in history later this summer. However, a lag from the previous two months indicates employers are taking a more cautious approach amid global tensions.

Economic output in the U.S. continues to be positive — 2018 closed out the year with gross domestic product (GDP) growth of 2.2%, and first quarter GDP exceeded forecasts, coming in at 3.2%. Forward-looking data as reported by the Institute for Supply Management (ISM) suggest that while still positive, signs of slowing are becoming apparent. The Purchasing Managers Index (PMI) for May was 52.1 (over 50 is expansionary), slightly down from 52.8 in April and 55.3 in March.

Inflation remains tame. Core Consumer Price Index (CPI) has stayed low at 2.1% year-over-year through April, well below the 50-year average of 4%. While wage growth has climbed to 3.3%, productivity gains and global pricing pressure continue to keep inflation low. However, in light of the aforementioned unrest, oil prices have recently climbed, driving higher gasoline prices at the pump. This may put upward pressure on future inflation data. In addition, higher tariffs have been imposed on Chinese imports, which could also contribute to inflationary pressure down the road.

Interest rates remain at historic lows. As of this writing, yields on the U.S. 10-year Treasury are approximately 2.1%, and, in a sign that slow growth remains in most of the world, nearly $10 trillion in international bonds actually carry negative yields.

The Federal Open Market Committee is holding the important Fed Funds rate steady in the range of 2.25% – 2.5%. They have noted risks to economic growth and spending, and in light of the persistently low inflation, are indicating a willingness to act proactively with a rate cut if economic weakness increases.

Growth outside the U.S. is even weaker, with the Eurozone in particular reflecting PMI readings below 50 (under 50 is economic contraction). Importantly, Chinese data has been rebounding, but the current trade war fears are likely to take a toll. China’s GDP in the first quarter was 6.4%, slightly ahead of estimates.

As always, please call us to address your questions, and make sure to apprise your advisor of any changes to your financial situation. 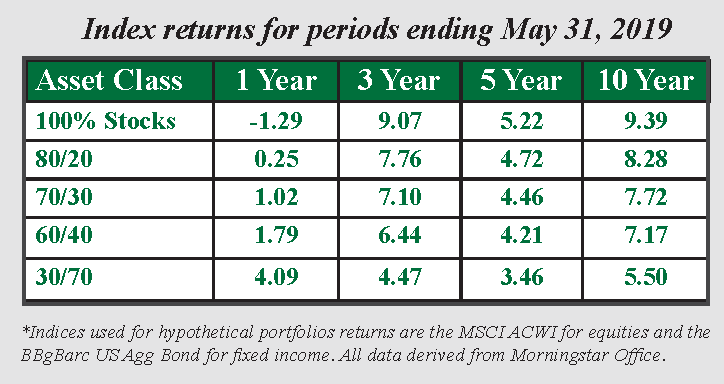