2020 has become the year of the coronavirus. With rising human and economic toll, stock markets around the world declined in the first quarter, culminating late in March with indiscriminate panic selling. The drops were historically fast and deep, yet, as the quarter ended, stock prices rallied in equally historic manner and recovered a large portion of the drop.  Indeed, at this writing, stock prices have continued to recover, with the Nasdaq now positive for the year-to-date. 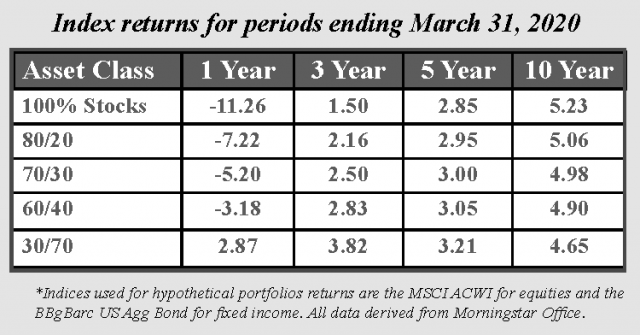 The U.S Fed decreased their key rate by 1.50% in the first quarter, dropping the target to 0.00% – 0.25%. In addition, to help credit market liquidity and businesses, the Fed announced unprecedented measures — engaging in unlimited corporate bond purchases and creating loan facilities such as the Term Asset-Backed Securities Loan Facility and Main Street Business Lending Program. It was essentially a powerful statement from the Fed that they will do whatever it takes to provide a backstop to the economy.

Not to be outdone, Congress passed a massive $2 trillion stimulus relief bill that was signed into law March 27. The package includes stimulus checks to individuals, sweetened unemployment benefits, grants to hospitals and airlines, emergency loans for small businesses, a $500 billion loan facility for distressed companies, and other measures.

As investors sought the safety of treasury bonds, yields on the 10-year U.S. treasury declined by 1.2%, ending the quarter at 0.69%.  In the midst of declining demand and a price war between Russia and OPEC, WTI crude oil fell dramatically to $20.31 per barrel.  Gold ended the quarter at $1,591.20, slightly higher than the previous quarter close of $1,520.

Headlines were made by U.S. job losses. Unemployment claims skyrocketed, with the leisure and hospitality sectors hit the hardest. At the end of March, unemployment rose from 1.4 million to 7.1 million (and has since continued to climb), the largest one-month jump since 1975. Forecasts for the ultimate virus effect run as high as a jobless rate of 20%.

GDP forecasts across the globe have likewise been impacted. 2020 is likely to be a “lost” year when it comes to economic growth, but signs of economic expansion are returning to China and economists are cautiously forecasting positive growth in the U.S. by the fall.

Note: As this newsletter goes to press, coronavirus impacts continue to take center stage. Financial markets have improved further since March 31 but remain highly volatile as company earnings are reported and as worldwide economies begin to carefully re-open. Governments and central banks have likewise continued to evolve their responses with additional stimulus measures and unemployment support. And of course, the scientific community has undertaken a herculean effort to find COVID-19 treatments and, hopefully soon, a vaccine. The future path of markets and economies thus remains fluid and impossible to accurately predict, but as noted above, broad consensus estimates point towards a turn toward positive growth later in the year and into 2021.