The Antidote to Noise

2019 is off to a fast start, continuing the roller coaster ride from 2018. And as the fireworks from the New Year’s celebrations around the globe faded, financial markets have provided their own bursts of brilliance—rebounding strongly from a dismal December. In light of the recent substantial swings in sentiment and value, we thought a few high-level observations could be helpful.

It’s important to remember that financial markets are constantly recalibrating and valuing future growth potential in economies and companies. This is a normal market process and how markets seek to find the appropriate price for a security at any given time.

But December 2018 was unusually negative. Headlines screamed “Worst December Since 1931!” The low point was reached on Christmas Eve when the S&P 500 briefly touched bear market territory—a decline of 20% from the peak. And for the year, the S&P 500 declined 6.2%, an annual drop not seen on statements since 2008.

What was missed by many, however, is that the volatility was exacerbated by a number of external factors. Consider these items that also came into play late in 2018:

So, in many ways, December saw the perfect storm of events culminating in the Christmas Eve stock market low.

Yet, as noted at the beginning of this commentary, equity markets are rebounding strongly in 2019 to-date. Have things really changed that much in less than a month? Let’s take a look at the facts on the ground.

Economic fundamentals remain solid. Data suggests that while US growth will slow as the year progresses, it will still be positive, with estimates in the 2.0% – 2.5% range. Job growth remains strong in the US and unemployment is at 50+ year lows. The January 4 US jobs report was a robust 312,000—significantly higher than forecasts.

Consider the chart below, which shows 11-year trends of the Global Purchasing Manager’s Index (PMI) for manufacturing. Heatmap colors are based on PMI levels relative to the baseline of 50 and indicate acceleration or deceleration of sector growth for the time period shown. Note the green trends (economic expansion) in 2018 compared to the red and orange trends (economic contraction) during 2008. Thus, while some are arguing that a recession is in the wings, these forward-looking indicators show otherwise. 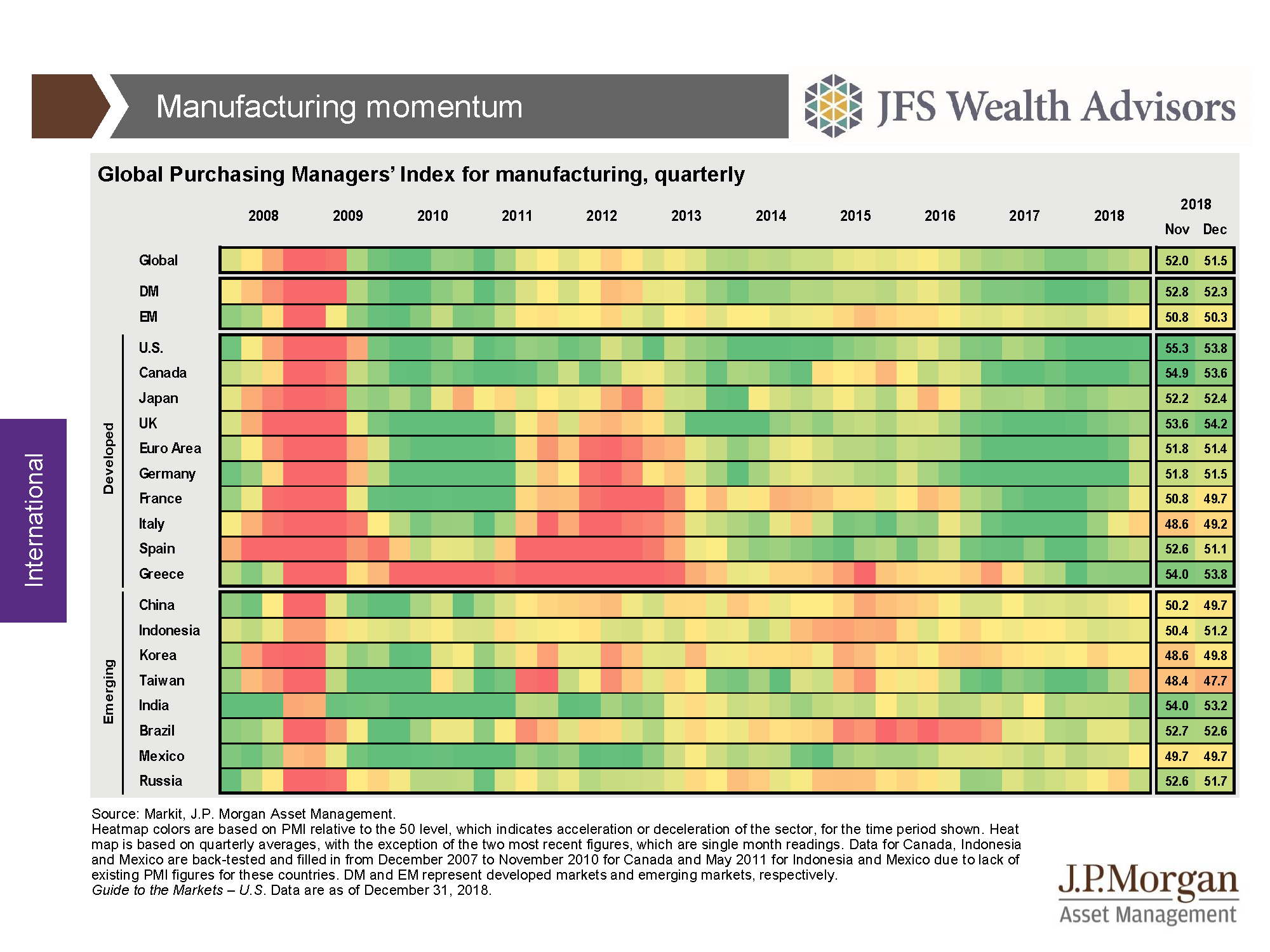 Some further examples of hard data:

Third quarter S&P earnings data were up over 30% year-over-year. Yes, there are recent signs from companies that the fourth quarter may not be as robust, but so far, this represents just a slowing, consistent with a glide path back toward a 2.0% – 2.5% GDP.

Inflation is tame and hovering around the Fed’s target of 2%. The latest wage growth figures at around 3% were encouraging. Rising wages, coupled with lower oil prices (down 38% in the fourth quarter), and minimal inflation translates to real spending power for the middle class.

Stock valuations are generally attractive based upon the slow but steady growth forecasts. At its Christmas Eve low, the S&P was trading at 13.5X forward earnings—well below long-term averages. A similar picture exists globally. On 12/31/18, foreign stocks as measured by the ACWI ex-US Index, were at 11.5X forward earnings, a 20% discount to the US. We continue to be optimistic about foreign stock opportunities.

Bond yields remain historically low—the 10 year US Treasury is again below 3.0%. New mortgage and refinancing applications have jumped in the first weeks of 2019.

Very importantly, the latest comments from Fed Chairman Jerome Powell indicate they are cognizant of the risks of raising rates too far in the face of so many cross-currents. Although the Fed is notorious for being opaque, this is a clear signal they are likely to be patient and cautious with further rate hikes in 2019.

Taking off the rose colored glasses, however, not everything is positive. There are real risks in today’s environment.

What to do in the face of this? Maintaining a consistent and diversified approach is the best antidote to the fear that noise can create.

We highlight all of the above in an effort to silence much of the noise and instead consider fundamentals. Portfolios of high-quality stocks and bonds, carefully managed and rebalanced, remain an intelligent choice for long-term wealth accumulation.

At JFS Wealth Advisors, we focus on carefully researched, global investments, maintain an eye toward the horizon rather than a myopic focus on today’s headline, and seek to meet every client’s needs with a tailored approach. We are confident in those capabilities, and look forward to answering any questions you may have. On behalf of all my colleagues, thank you for your continued confidence, and our very best wishes for a healthy and happy 2019.