While COVID-19 still dominates headlines and global health impacts remain serious, a positive emphasis on climbing vaccine rates and reopening economies has replaced the negative emphasis of rising hospitalization rates and shuttered economies of this time last year. The light at the end of the tunnel is not a mirage nor a train headed at us. Clear-eyed realism remains necessary, but the relief for so many is now palpable.

As a “post-pandemic” future begins to materialize, reflecting on the past 15 months since the pandemic broke into the world seems natural. Thinking specifically about the successful management of wealth in such a time of uncertainty, can any conclusions be reached?

While reflecting on earlier observations can be a great way to learn humility, it is always enlightening, and occasionally, even gratifying. In this case, as we consider our fiduciary role as stewards of your financial well-being throughout this crisis, we see that solid, time-tested advice remained as sound as ever.

For example, in March of 2020 we wrote “… keeping one’s head in time of uncertainty, and indeed, when there are whiffs of panic in the air, is the proven way to succeed when others fail.”

We also noted, “Currently, markets are pessimistic – perhaps overly so.” “… we also know how hard “staying the course” can be.”

And finally, in the face of widespread gloom, we struck a hopeful tune – “in the history of markets is hope – based on fact, not conjecture – which reveals that financial markets always recover from disruption and move on to new and higher levels.”

Twelve months later, those words have proved prescient. Lest this sound too self-congratulatory, let me explain. We note these past statements to remind us that – while the inputs to market turmoil can be vastly different – recession, war, rocketing inflation, even a global pandemic spreading like wildfire with no cure on the horizon, the outcomes coalesce similarly.

“Staying the course” is not just a catchy phrase. When combined with a thoughtfully constructed portfolio and underpinned by solid financial planning, it is a recipe for success. Our belief in maintaining perspective, practicing patience, staying calm and carrying on, and avoiding drastic changes comes not from a crystal ball, but rather from years of experience that have proven time and again that a steady hand on the tiller allows the best course to be steered.

With that as a backdrop, where do things stand today? While we are not yet out of the woods from a health viewpoint, economies and markets are gaining momentum. Consider just a few of the following facts:

Clearly, the sentiment tide is rising and, in general, has been since vaccines came on the scene and a contentious and divisive election faded from the public arena.

In striking this cheerier tone, let us be clear on one thing, though – the human toll of the pandemic is not yet behind us and a return to economic optimism in no way diminishes the pain and loss felt by so many. While all of us have had our lives impacted by the virus, a distressingly high amount have also been personally touched with far deeper grief. Heartbreak has been prevalent, and indeed, has been one of the jarring disconnects over the past 15 or so months – a brutal societal impact has not been mirrored, other than for a few short months, in financial markets.

As we have noted was likely to occur, the grand “re-opening” of economies (albeit unevenly and in fits and starts) has resulted in a sea change in both stock and bond market dynamics. We spent considerable time in the past discussing “mean reversion” – the fact that certain long-held relationships may diverge in the short run due to external forces but will revert to the mean (average) in time.

As the saying goes, sometimes quickly, sometimes slowly, but in this case, the mean reversion we highlighted has occurred rapidly. Consider the charts below: 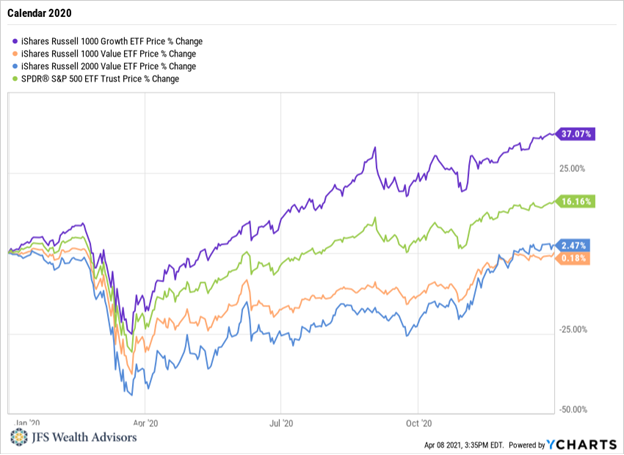 For 2020 – “The Year of the Pandemic” – a handful of large tech-oriented companies led the way in market gains. The top five stocks in the S&P 500 came to represent the highest percentage weight in history, and most other companies lagged far behind. The so-called “stay-at-home stocks” such as Amazon, Google, Microsoft, and Facebook soared as if their earnings would forever benefit from the altered pandemic lifestyle.

This is seen in the above chart by the purple large growth stock return significantly beating the S&P 500 (green), as well as large value (orange) and small value (blue). Many investors looked at these returns unfolding and concluded it was a new world – the historical outperformance of value stocks versus growth stocks was a thing of the past.

But hold your horses. As the year wore on and a way out of the pandemic began to emerge, the “mean reversion” rotation we wrote about began to forcefully occur as shown in the two charts below. Over the 6-month period we observe a nearly complete reversal of fortunes – with small value leading the pack, followed by large value, the S&P Index, and then growth stocks. The “Year-to-Date” chart below reveals a very similar story. As the “leave the home” stocks benefiting from economic reopening begin to revive, we are witnessing a reversion to more historical market dynamics. 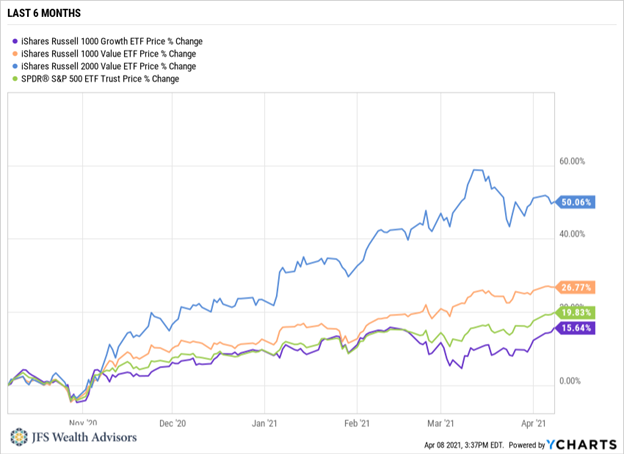 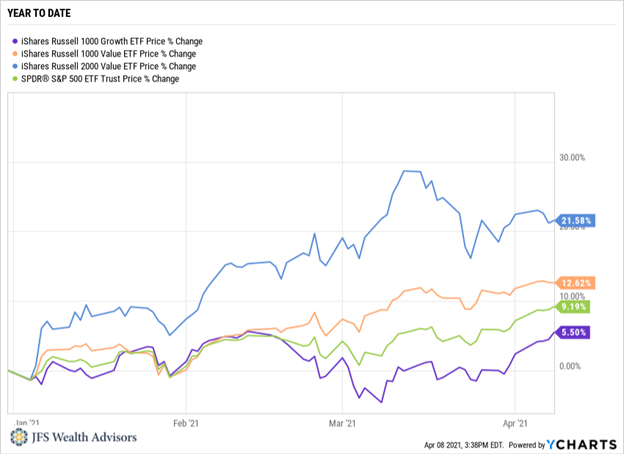 Why is this important? Because JFS core portfolios and long-term planning assumptions are built around the belief that while markets cannot be predicted or timed, they can be counted on to hew to such long-held observations. As we have written several times, the pithy phrase – “the four most dangerous words on Wall Street are … it’s different this time” – is worth repeating. Yes, the unexpected can cause markets to react in unforeseen ways – favoring only a few pandemic proof companies, for example – but such deviations do not last, and the long-held benefits of thoughtful diversification and proven strategies to mitigate risk and smooth returns come back.

Stock markets have received much of the attention throughout the COVID crisis, but bonds are increasingly drawing notice. While the pace of recovery gains steam, there are rising voices of worry about accompanying inflation. Are we facing a return of unwelcome price increases due to strengthening economies and the simultaneous flood of stimulus liquidity? While on the surface this is a reasonable premise, and indeed interest rates have risen sharply in 2021 (at least here in the U.S. and in a handful of emerging market economies), we believe the evidence is not yet clear that the table is set for damaging inflation.

Consider: In its most recent meeting minutes, the Federal Reserve Board called inflation pressures “transitory” and expects to be able to maintain inflation at or slightly above the long-term target of 2%. March CPI data revealed only a 1.6% year-over-year rise in the “core” measure. While the more volatile “headline” figure that includes food and energy did rise at a pace above 2%, that is primarily due to the very low crisis base level of a year ago.

While some believe the Fed is whistling past the graveyard and that they are soon to lose control of rates, that does not seem likely. Most importantly, consider what the markets themselves are telling us. Today’s “breakeven” rates between nominal Treasuries and their inflation-linked counterparts (TIPS) are at 2.3% for the 10-year and 2.1% for the 30-year. In other words, yes, some near-term rise in inflation is expected, but longer term, the trend is flat.

Note in the chart below further evidence of what data is telling us. On the left, the 5-year expected inflation rate of 2.1%, and on the right, an example showing that, in order to achieve the Fed’s 2% target inflation rate from the current 1.6%, the measure would actually need to run well above 2% for the next three years. Thus, while the indications do indeed bear watching for now, the inflation picture remains stable. 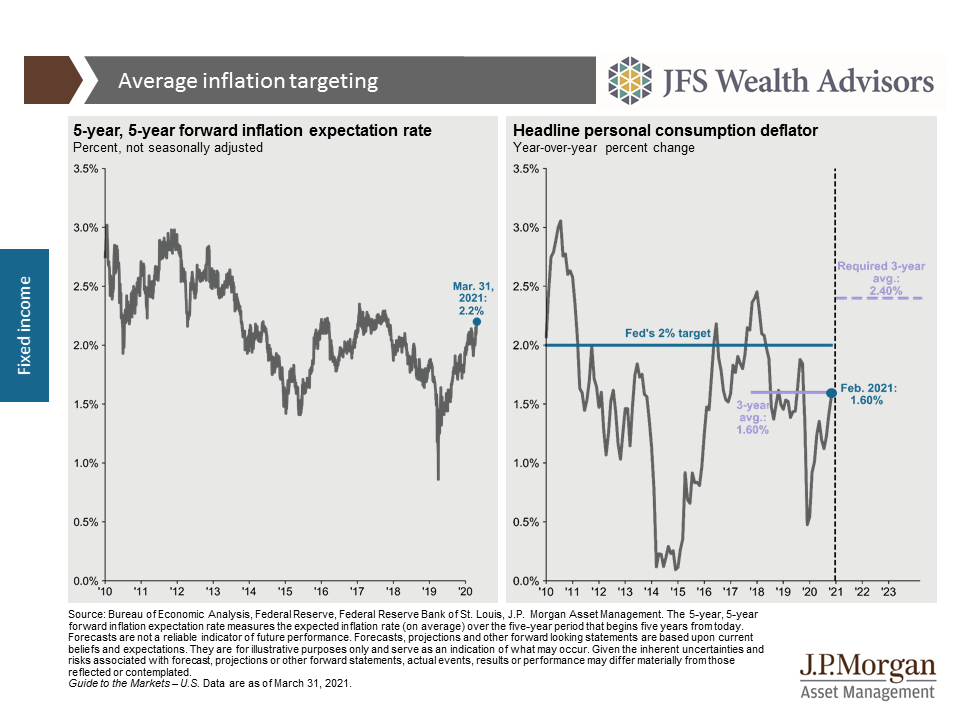 In such an environment, rather than abandon bonds and search for greener pastures, we instead believe that taking a pragmatic viewpoint is desirable. Bonds remain an important portfolio tool for safety, liquidity, and income. Although from a total return perspective they are not as attractive at these levels as they were in times of the past, departing from core, high-quality bonds in a search for the siren song of higher yield comes with a significantly higher risk of either principal loss or interest rate volatility – exactly the opposite of what a bond component of portfolios should do.

As fiduciary advisors, our role as advocates and guides for your financial matters should always be to provide the proven best opportunities to add value – whether that is in investments, planning, or portfolio management. Sometimes what is “best” is hard to see and hear amid uncertainty and loud and competing voices. Much of 2020 was that kind of year, but the rewards of discipline and patience are now clear.

As 2021 unfolds from here, it seems the big-picture story will continue to be one of steps forward, but also stumbles and even some steps backward along the way. The pandemic is not yet in the rear-view mirror, and the ongoing ebb and flow of news and sentiment will create similar back and forth in financial markets. For our part, we will continue a consistent focus on putting our clients first in all we do and adhering to time-tested approaches to build your successful financial futures.

Please contact your client service team with any questions, and as always, on behalf of all of us at JFS, we thank you for the continued confidence.