The Infatuation with Growth

Spend some time researching well-known quotes and you will find something interesting… many of them are considered apocryphal, meaning not really attributable to the person that supposedly uttered the words. We intended to start this exploration of recent stock market trends with a sentence most often credited to the well-known British economist John Maynard Keynes, “Markets can remain irrational longer than you can remain solvent,” supposedly written in a letter home in 1920 after he lost all his savings trading currencies. But alas, there is no direct evidence that Keynes actually said that, and some attribute the words to the still-living financial analyst Gary Shilling. Regardless of the origin, we will springboard this commentary from there because it speaks well to the topsy-turvy investment environment seen today.

We noted in our first quarter commentary that 2020 had become “the year of the coronavirus.” As we write this some five months later, in many ways nothing has changed. After a lull the virus has roared back, and uncertainty on the medical, societal, economic, and financial market fronts remains prevalent.

In addition to disrupting normal life, the pandemic has had an oversize impact in financial markets. From total shutdowns to gradual reopening, businesses worldwide have been radically disrupted. Operations, cash flows, and ultimately profits have been put at risk, and in extreme cases, will not recover, leading to bankruptcy. Yet, take a superficial look at stock markets and conditions don’t seem so bad. The widely known benchmark for U.S. stocks – the S&P 500 – after plunging well over 30% in March is now essentially even for the year. Everything must have recovered, right?

Not so fast. Underneath the surface are vast gaps in stock performance, and many warning signs are flashing that indicate the pandemic has resulted in unsustainable market dislocations. Since February, a narrow handful of companies has driven the bulk of market returns – namely, the biggest of the big technology stocks.

In a recent article, here’s how CNBC defined the concept behind an index… “The S&P 500 is supposed to represent a broad cross section of large U.S. companies, giving index investors an attractive way to diversify their money while betting on the domestic economy.”  That is an accepted concept. But because the S&P is “cap-weighted,” meaning each stock is weighted by its market value, that diversification can at times be diminished and leave unwary investors in a more concentrated position. Here’s what immediately followed in that CNBC article… “That’s no longer the case.”

Consider the chart below. Microsoft, Apple, Amazon, Alphabet (Google), and Facebook now comprise nearly 22% of the index, meaning how they act is disproportionately driving performance. Looking at the index “equally weighted,” meaning each of the 500 stocks is a similar weight, is a way to better understand all 500 stocks and how they are doing. Instead of being flat for the year, the equal-weight performance is down by approximately (7%). Buying the “cap-weighted” index today is an explicit bet on technology, something many may not understand.

While there is good reason these companies have performed so strongly year-to-date relative to other companies, the question must be asked… “can this continue?” History tells us extremes like this do not last. As fund manager AQR put it recently, “Investors have placed a disproportionate focus on innovation and longer-term aspirational growth while showing a willingness to overlook current earnings, cash flows, and valuations.” Caveat emptor. 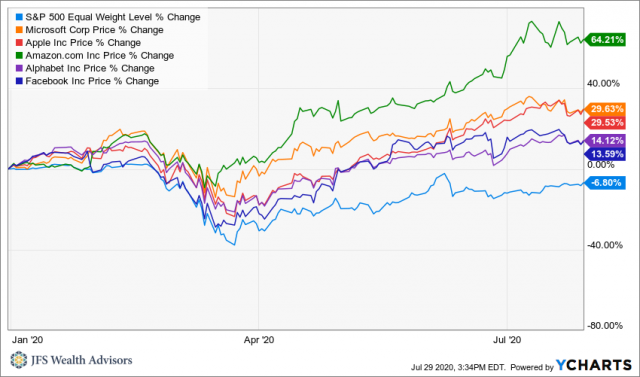 In addition to the concentration effect, many other historical relationships have been skewed dramatically by the pandemic and the entrance of a new crop of day-traders often using the popular “Robinhood” app to occupy their time stuck at home. As investors and their dollars have focused on these large tech companies as well as other wildly popular stocks such as Tesla (whose stock price has increased 300% this year and whose value is now over twice that of Toyota’s), there are eerie echoes of prior bubble excesses.

One of the most discussed of these relationships is that of growth and value. We have touched on this aspect several times this year already in our communications, but now want to focus on it in greater depth. In the chart immediately below, we track the MSCI World Growth and Value Indices – we chose world rather than just U.S. to illustrate the impact on all stocks. As can be seen, the growth index exhibited outperformance in the 2000 bubble, was followed by nearly 10 years of value outperformance, and, since 2015, has once again diverged in a manner favoring growth. But markedly different this time is the magnitude of this gap – it far surpasses what was seen in 2000. While we (nor anyone else) can confidently predict when this relationship will revert, it is reasonable to assume it will, and then when it does, the snap back can be abrupt.

Think of the setting this way… There are things we know, things we believe, and things we wish for. Sensible investing should be framed in these terms – build a framework on the certainty of what is known, let concrete beliefs derive from that, and avoid wishful thinking. But the inefficiency seen in market bubbles tells us that most investors start backwards on the list… in other words, wishing for positive outcomes based on what they think and hope they know. Long-term studies tell us over and over that such emotion-driven investing fails to deliver. But what if there is a better way? We believe there is – a framework that, while remaining flexible, is grounded in data and science. Such an outlook and investment framework is at the core of JFS portfolio construction.

Beginning in 1992, work by economists Eugene Fama and Ken French built on prior studies to develop a “three factor” asset pricing model, revealing certain “factors” inherent in stock prices that proved to be statistically significant predictors of outperformance. From that groundbreaking work (Eugene Fama was awarded a Nobel Prize in 2013) have sprung multiple firms and “factor” strategies, and the research is ongoing. The field continues to evolve in exciting ways.

One of the most reliable factors, and one which JFS utilizes in portfolio construction, has been the value premium – in other words, the scientific evidence that a value approach outperforms a growth approach over time. This means emphasizing investment styles that focus on companies that (typically) exhibit lower valuations such as price/book or price/earnings, whose cash flow is often distributed back to shareholders in the form of dividends, and whose stock prices can be less volatile. Such an approach is seen in the long and market-beating track record of Warren Buffet and Berkshire Hathaway. Contrast this with growth stocks, fast growing companies that typically trade at high valuations, retain free cash to reinvest into the business, often do not pay dividends, and whose stock prices are frequently quite volatile. Of course there are variations and nuances around these definitions, but the basic distinction is clear.

Equally clear is that value has outperformed growth consistently and over long periods. See the two charts below*, which utilize a long data set beginning in 1937 – over eighty years of observations. One does not need to be a statistician to draw a clear conclusion! The first shows the 10-year rolling period excess return of value over growth by year. There have been only two other extended periods in this entire time frame where that value is negative, with this period being the longest. Note the significant outperformance following the other two periods. 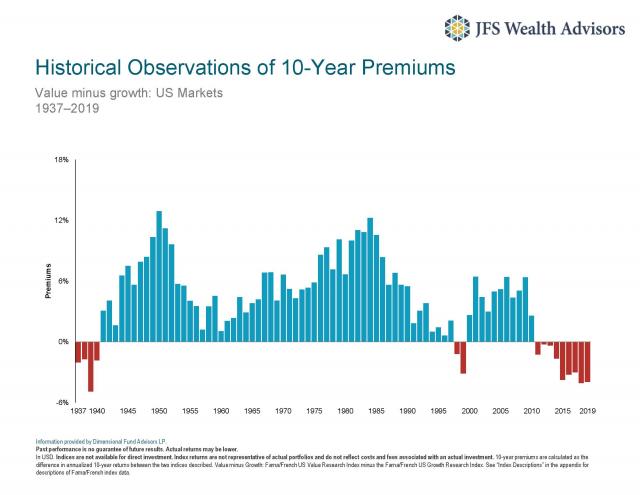 Looking at the same data in a different manner yields an even more compelling picture. Outside of the Great Depression Era and the rebound following the Great Recession of 2008, the current period is the largest (and approaching the longest) exhibition of growth beating value. 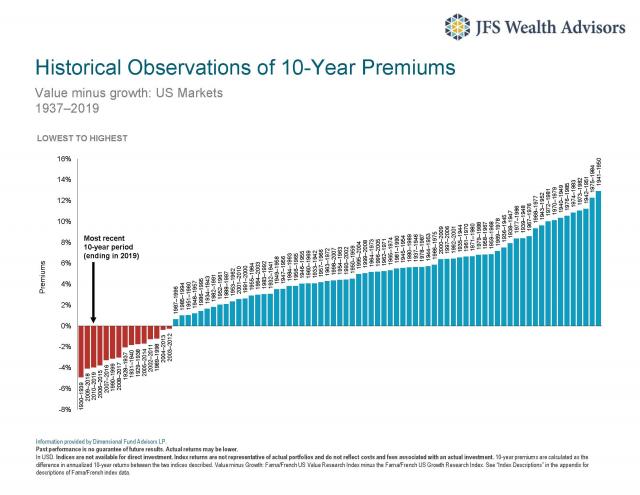 It is clear that over this 80+ year span, considering rolling ten year periods, value consistently has beaten growth. We believe this tells a compelling story of where to concentrate investments. The challenge in this seemingly simple statement is the human nature of being uncomfortable in these rare periods when growth wins dramatically. This emotional disconnect leads us back to the opening quote misattributed to Keynes… “Markets can remain irrational longer than you can remain solvent.”  While quite reliable, there are times when value lags its growth counterpart, and those times can be frustratingly long – we are in one such period today. But take heed and take heart, in every single instance, the trend has reversed to the historical norms.

Why are we experiencing today’s infatuation with growth? The pandemic has undeniably changed many aspects of our lives, and in a short period of time money has flowed to companies that have seen the most benefits from these changed patterns… companies such as Amazon, Google, Apple, etc. This emphasis has driven investor behavior in a way not seen since the late 1990’s – a heady time of speculation followed by a devastating bust in the Nasdaq and technology stocks. This is not a prediction of a 2000-style meltdown, but disregarding previous examples can be dangerous to your portfolio’s health. Consider the following:

On March 31, 2000, with the “internet bubble” near its peak, growth benchmarks were outperforming value over every trailing period back to fifteen years. Seemingly irrefutable evidence was headlined that a new era was upon the markets. The outcome? Just a short year later, March 31, 2001, every single period had flipped, with value now outperforming growth… all the way to twenty years trailing!

The point? As the old saying goes, “history may not repeat itself, but it sure does rhyme.” In other words, we’ve seen this movie before and know the ending. Maintaining a diversified, balanced portfolio construction theme with an emphasis on an evidence-based investment style is key to long-term success. We have written before about the concept of “mean reversion,” a statistical term used to describe the tendency of prices and returns to coalesce around the long run mean of the entire dataset. Time and again this proves to be the case, and we expect it to be true as the world moves through and beyond this terrible pandemic.

Maintaining a focus and discipline is crucial to building and preserving wealth so that it is available to meet unique individual needs, the ultimate goal of our JFS teams as we work with each client. Relying on data and science, not sentiment, is our time-tested way to seek long-term success for our clients. We know this from our own experience and also from datasets such as those referenced above – stretching back nearly 100 years.

Such focus and adherence to discipline can be tough. But similar to resisting the siren call of the fridge while working from home, sticking to proven investment strategies helps avoid later regret.

On behalf of my colleagues, we wish you all health and an attitude of perseverance and hope during these times. Thank you for the continued confidence you place in us. At the end of the day, that confidence is our greatest asset with you, one that we work tirelessly to maintain and deserve.